The Maloik (Malocchio) or the "Evil Eye"

This is a re-post of what has become my most popular post- originally posted 9 years ago.


While not Italian in origin, many Italians believe in il malocchio (often pronounced "maloik.") Part superstition, part tradition, it is the belief in the evil eye, placed on someone when someone else is jealous or envious of the other's good luck. The malocchio then manifests itself in some sort of misfortune onto the cursed person, usually some physical ailment.

It can also be done involuntarily, like when you see a beautiful baby and you compliment the parent. That could be construed as envy and the parent must then say something like "God bless her" right after it to ward off a possible malocchio, many believing that even though the compliment may have sounded sincere, its real motive was envy. That's why my cousin made me put a red ribbon over the threshold of my new home and told me to throw salt out of all the doors- to protect us from envious people. The person who gives the evil eye is not necessarily evil, but does indeed harbor jealousy.

One can also ward it off by wearing a horn (cornuto) around the neck or making a gesture with your hand (mano cornuta-which you may know from heavy metal concerts). It is said that Italian men wear the cornuto to protect their genitalia from the malocchio, as the curse is said to harm sperm. 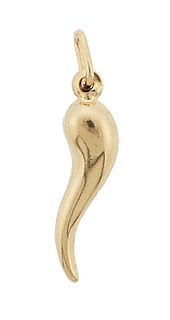 I can't say that I believe or disbelieve the malocchio and I only have one indirect experience with it...

When my mom was in her twenties, she got a great job with the government. Soon after, she began getting terrible headaches that aspirin would not relieve. She suffered with them intermittently for a few weeks when it dawned on my litte Sigi grandmother what the problem was.

"Someone gave you the maloik. (malocchio).""You're crazy. Who would do that?" my mom responded, not telling her she was crazy for believing in "stregheria" or Italian witchcraft, but, rather, for thinking someone would put the curse on her. (The irony that my grandmother was a devout Catholic whose church forbids belief in witchcraft is not lost on me.)
"Who knows? You have that nice job now- someone is jealous and put it on you."
"Nobody is jealous of me."
"I want you to go see the strega down the street." The local strega, or Italian witch, was known to be capable of removing the horrible malocchio that afflicted unassuming Italians in the South Philadelphia neighborhood where they lived.
"I'm not going to the strega. Forget about it. The headaches will go away."
My grandmother never mentioned the malocchio again to my mother.

About a week after the strega conversation, my mom could not find her watch when she was getting ready for work. She asked my grandmother if she had seen it but she had not. My mom, a very organized and detail-oriented individual (you say anal, I say detail-oriented) who never misplaces anything, was disturbed by the missing watch. She looked everywhere for it and finally resigned herself to the fact that it must have slipped off to or from work. The stress only contributed to her constant headaches. (Knowing my mom like I do, I don't for a minute believe that she accepted that her watch was gone, and she probably continued to search for it for at least 24 hours more.)

"Are you sure you didn't borrow it and not put it back?"
"Bah, why do I need a watch? I don't go anywhere!"
"Did Daddy find it and put it in my room?"
"I don't think so. So... how are your headaches?"
"Funny, I didn't get one today."
My sigi grandmother smiled but did not say anything.
"Why are you smiling?"
"I took your watch to the strega since you wouldn't go yourself. She took off the malocchio."
"Mom!" she yelled
"It worked, didn't it?" My mom didn't know what to say to that. It was more troubling to her that someone had put the malocchio on her then the fact that there was a Sicilian witch living on their street who claimed to be able to both curse and remove curses.

How did the strega allegedly remove the malocchio. Probably by inserting the tip of a needle into the eye of another needle while saying: “Occhi e contro e perticelli agli occhi, crepa la invida e schiattono gli occhi." That means “Eyes against eyes and the holes of the eyes, envy cracks and eyes burst.” She then dropped the needles on top of three drops of olive oil in water and sprinkled three pinches of salt into the water. The strega would then jab scissors into the water through the oil three times and cut the air above the bowl three times and POOF! The spell was FINITO!

...or the aspirin finally kicked in.