A cheese by any other name... doesn't touch my food! 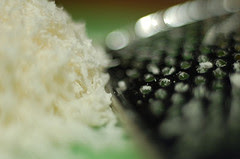 I had dinner guests at my house tonight and I served manicotti. I also made meatballs. Now, please know that what makes my meatballs so good is the enormous amount of pecorino romano (aka "parmesan,") cheese that I add to them. So, the topic of conversation turned to... cheese, and my one friend asked if it were Lo-ca-tel-li cheese. As if there were any other kind?? Her husband, for whom she does not make Italian food, since although she is Italian, he is not, had never heard of this cheese. I showed him the little bag of almost one pound of the finely grated cheese. He saw the price and said "NINE DOLLARS FOR THAT?" His wife and I looked at each other and just said "yeah." Like, duh, of course, IT'S LO-CA-TELL. You can buy it in a big wedge and grate it yourself or buy it already grated. I have carpal tunnel syndrome in my right hand so I can't grate it anymore, but it tastes just as good if it is already grated.

I was raised on this cheese. I never knew it by "pecorino romano", or "parmesan," or "grated" cheese. It was just "Lo-ca-tel." as we tend to omit the end of words in Italian.) No other brand ever made it into the house. In fact, before I wrote this, I asked my friend, "When you were a kid, what did you put on top of the gravy on macaroni night?" No hesitation: "Lo-ca-tel." My dad would buy it in South Philly at the corner cheese store or the Italian deli, and in fact, still drives there to get it for my mom. When I lived in Lancaster County, PA, for college, the Pennsylvania Dutch-owned stores and even the bigger supermarkets did not carry such cheese. It's usually in the deli section. So, my first time shopping on my own at 19, I had no choice but to buy Kraft grated cheese in a can. The can was green and I can still remember the taste of the "cheese." I believe it was actually made of plastic. I can't quite describe the taste, but if evil had a flavor, it would be that Kraft grated "cheese." I threw out the pasta I had made because once the cheese touched it, it ruined the entire meal for me.

I called my mom and she "tsk'ed tsk'ed" me for buying it but there was not a lot to choose from. Since I have lived in five different counties in the state, I have tried a lot of grated cheeses when lo-ca-tel was not available and each time I opted to eat my macaroni without cheese after having tasted it. Now to an Italian, at least, in my family, macaroni, or "pasta," is never served without grated cheese. However, because it is so expensive, my mom frowns on using a lot. I have inherited that trait and have been asked if I'm giving out Communion when I put cheese on everyone's food so they won't use a giant pile. Then some smart cavone grabs it and dumps about $2.75 worth onto his capellini.

Ok, so I love Philly sports. We don't get very far but we're used to it. It doesn't hurt any less, but most of us are numb by now. The Flyers last took the cup in 1975. I was in first grade and the school cancelled afternoon classes so when we went home for lunch we just walked to Broad Street with our parents (also home from work) and watched the victory parade. I didn't know why I was cheering for these huge guys on a float but I was darned happy to be out of school. I'm lucky I have savored that memory because it may not be repeated in my lifetime.


By the time the Phillies won the World Series in 1980 I was a major baseball fan. I tried to stay up that night to watch until the end but it was a school night and I couldn't keep my eyes open. Until, of course, the horns in my neighborhood started honking. I woke up and caught the big victory pile-on, then I ran around the house screaming. My parents weren't home, though, they were at a World Series party and my grandmother wasn't so into it.

When the Sixers won, I was away at college and didn't care. I hate basketball. But GO SIXERS anyway, it had been six years since any team in Philly had the word CHAMPS after it.

The Eagles, however, are a different, if you'll pardon the pun, ball game. Eagles fans are hard-core, loyal, defensive and well, a little violent. An Eagles game is not a place for children. When my dad took me to my first game I was a teenager and my uncle chastised him- "You're going to expose her to all the cursing and fighting?" My dad assured him it would be fine. And it was- I only saw one guy get harrassed. He was rooting for the other team. Seriously, what was he doing there anyway?


But when you mention Dallas to an Eagles fan, the hairs on our neck stand up. I have seen some fans' eyes roll back in their heads. Some people even foam at the mouth. And if you bring a Dallas fan into a room of Eagles fans, they inevitably start talking trash to us about their five rings and their Tony Romo and how the ball he fumbled the snap in the last game last year was "waxed," yadda, yadda, yadda. (Yeah, well in light of the Pats' spying, we'd like our Superbowl rings, please!) Yes, Eagles fans hate Dallas. Since the days of Roger Staubach, Eagles fans have been groomed to despise the Cowboys from when they are little. It may even be encoded in Philadelphians' DNA. And, we are not shy about it. Remember the Dallas game when Santa walked onto the field? The Eagles fans threw snowballs and booed him. It wasn't the poor, drunk, Santa's fault. He just happened to be caught up in some literal "playah hatin'" is all.

And it's true, give 'em credit, Dallas does have a good record. But the beef with Eagles fans is that all the "forgeses," the turn coats, the Benedict Cowboys, who are from cities not even close to Dallas, consider the Cowboys, "their team." This is what ticks off Philly fans the most. Their home teams don't win so they bail on them and go to a more successful team, usually Dallas. We actually respect the 5 Superbowl wins though we won't admit it, but WE HATE DALLAS and the non-Texas residing fans who are so obnoxious. Right, we have not won a Superbowl but we have something Dallas fans will not ever have, at least those not in Dallas:

I have seen grown men cry when the Eagles lost the Superbowl, and even hed a tear when they made it there. People may think "Invincible" is a silly movie, but if you watch it, you'll understand what it is to be an Eagles (and a football) fan. We stick with the Eagles no matter what. Whether they win or lose, we still root for them. When they lose we don't switch teams to find a better team. We have a name for them in Philly, forgeses. Oh the suffering of having a team that hasn't a single Superbowl ring... the shame and the embarrassment we endure...That's ok, we're still waiting and hoping and when we get that damn ring it will feel better than all 5 of those Dallas rings together. Of course we want our hometown team to win- but if they don't, we love them anyway. And I'm no big McNabb fan, and I curse at the tv like everyone else when he throws to an imaginary receiver, but the Eagles are still MY TEAM.

As for Dallas, I would like to thank you for taking TO off of our hands. It was the one day I can remember when I cheered Dallas on. 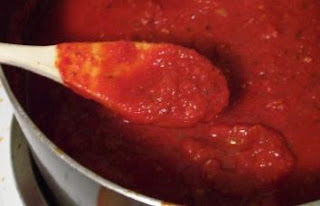 I just made a pot of "mahdanad" (that's marinara for you medagons) and I started thinking about how hard it was for me to master this very important staple to the Italian-American diet.

I couldn't cook a thing until I lived on my own in college. I poured a mean bowl of cereal but my mom was a stay at home mom until I was a senior in high school and we always had our lunches packed and our dinners cooked. Why would I have needed to know how to cook?

So, once in an apartment at 18, I committed the gravest of sins- the worst thing an Italian-American daughter could do- I
Posted by Sigi Me at 4:48 PM 1 comment: