Pennsylvania. It's the only state I've ever called home, although I have lived in a lot of different parts of it. I have spent a lot of time in New Jersey; every summer of my life has included a trip down the shore, and several weeks a year in Florida while my grandparents lived in West Palm Beach for ten years. I hate the beach so trips to the Jersey shore are akin to torture for me. The sand mysteriously ending up everywhere on my body, the salt on my skin, the jellyfish, the wind sending grains of sand into my contacts lenses in spite of my sunglasses, the four times in my life I have been crapped on by seagulls, the chasing of them from my children so they can eat in peace, the seaweed that tangles itself up in places the sand may not have gotten to, and the inevitable sunburn I endure along the part in my hair from wearing a ponytail. I don't like it one bit.

In all the trips I have made to Florida, however, it wasn't until this past summer when I touched a Floridian beach. I generally park myself at the pool and swim and tan. I'll read in the pool if I can. Give me a raft and I'll sleep in the pool. But the Ft. Lauderdale beach I liked no better than a Jersey beach, except the water was calmer, bluer, and free from floating garbage. But there was sand. And I hate sand. And the summer Florida heat and humidity did not improve my outlook at all.

Now, in Pennsylvania we don't have an ocean or beaches, unless you count lakes. But, my state does have beautiful and diverse scenery- mountains, farms, lakes and amazing foliage in autumn. We have Philadelphia for culture-vultures and the Pocono mountains for those who want to relax and soak up nature. We have an Amish community in Lancaster County where people can marvel at how simple life can be. The scenery behind my house is amazing-in the spring and summer the mountains are green and picturesque. In the fall the colors are breathraking. In the winter I have a perfect view of the ski slopes and the ski lift, which at night is quite a sight to see all lit up.

But now that I am older, I find myself cursing just about every day when I go outside from about December through March. Sure, when the snow falls it's gorgeous. And late at night when I go outside with the dogs and it's snowing or it has just snowed, it's so perfectly silent and serene and white that I forget where I am for a second and I just stand there and relish the silence. Ahhhhhh.

Then I snap out of it, pull my eskimo-style coat around me, stomp the snow off my boots on the doormat and hurry back inside to the heat. For as much as I hate the humidity, the 90 degree weather in Florida, the sand in my eyes and my teeth, for as much as I hate finding seaweed in my bathing suit when I shower and as much as I want to throw things at seagulls, there is something I hate so much more that I would take a sandy, seaweedy bathing suit, sand in my eyes, a burnt scalp and a windy day at the beach where stupid people don't know to put their umbrellas down and they fly all over. And that is THE COLD.

It's 17 degrees right now and going down to 8. EIGHT. ONE DIGIT. Humans were not meant to live in SINGLE DIGITS. At least, not THIS human. I mean, you know it's cold when the hair in your nose freezes. And I won't even talk about how much fun it is as an adult to shovel the snow. Let's just stick to the COLD. In 1994, right around this time, PA had a major freeze. It was so bad that the Delaware River froze and the boats transporting fuel got stuck. I was staying with my parents because my apartment was freezing cold. It was so bad that their heater just couldn't crank high enough to keep the house warm. It was so bad that I slept in thermal underwear, two pairs of sweat pants, three pairs of socks, 2 t-shirts and a sweatshirt plus a hat and gloves on one of those nights. And my nose, which was not covered, was frozen when I woke up.

It is this time of year when I start dreaming of Florida. My husband, who hates the winters more than I do and would live in a hut on the beach if he could, calls his boss and says he wants a transfer. I start looking at real estate in Florida. I begin pleading with my parents to please move with us to the Sunshine State because I can't leave them here. They tell me I'm crazy, why would I want to leave Pennsylvania? And I say: BECAUSE IT'S FREAKIN' COLD!! FA FREDDO! FA FREDDO! Hello?? COLD!!!

As I am typing this I'm doing a search in the Palm Bay area of Florida for houses. Sure. I'd miss PA, but I'll bring pictures of the PA landscapes and look at them on my raft in the pool in February. I'd visit in the summer. Ma, I know you're reading this, and you're going to be responsible for me turning into a human popsicle. Remember my knees, the cold isn't good for my arthritis. It will be all your fault if my teeth chatter so hard they fall out. Is that what you want? A toothless gimp for a daughter? For now, I'll just pray I make it to March without hypothermia.

Where I could be right now: 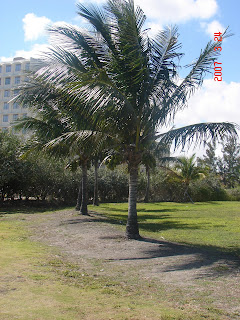 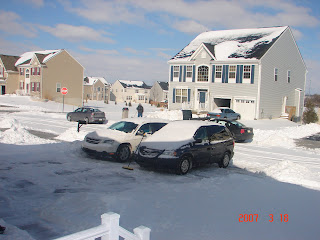 To be fair, this is the view in the spring from my bedroom window: 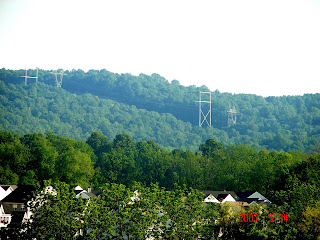 greetings all the way from Puerto Vallarta. =)