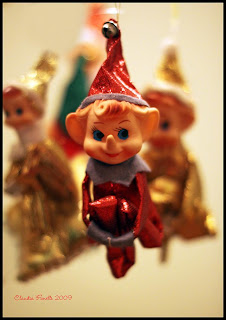 My mom, who is the consumate Christmas decorator and should really be doing the window dressing at Barney's, begins decorating the day after Thanksgiving. She sends my dad up to the attic and the procession of boxes begins. She carefully unpacks everything and places them in their pre-arranged spots. As kids, she would direct me and my sister as to where to place each decoration. But it was watching my mom hang up those pixies that I most looked forward to every year. They were my favorite Christmas decorations and I used to watch them sway and turn as they dangled. When Christmas dinner got boring, I would stare at the pixies and blow up towards the chandelier when nobody was watching so I could make them dance. I don't know if as a kid I thought they were magical or just mesmerizing, all glittery and sparkly, but to me, they represented the holidays at home.

One year, as an adult, I was discussing decorations with my mom. She had recently had surgery and didn't feel up to the usual lavish decorating marathon. I said "you're going to put the pixies up, aren't you?" "I don't think so, it's a lot of work." I said "You have to put them up! I'll come do it for you! It's not Christmas without them!" I was actually whining! Well, she put them up afterall, without my help. WHEW!


In 2006 I decided that in my new home where I finally had a chandelier, I wanted some of those pixies. I began to look online because I had never seen then in any stores. I couldn't find them anywhere online except eBay- and those were all used. There were no new ones to be found- they hadn't been made in years! Rats! So I did the only thing I could, because by then I was hell bent on getting those pixies- I started bidding on other people's throw aways! But guess what? Many other people had the same idea! The ones I wanted- the sparkly, blingy-outfitted ones, were rare- I could only find the ones dressed in felt. So the prices were high and I kept getting outbid. In 2006 I managed to win a few but not enough for my chandelier. The next year I went through the same thing- I won a few auctions and had to salvage a few good ones from each lot because some were filthy or just really battered. I won some more in 2008 after Christmas and by then I had about a dozen. I was already excited for Christmas 2009.

It's now 2009 and I finally have my complete collection of other people's used Christmas decorations. Today I decorated the house and the tree and the first thing I did was the chandelier. It took over an hour to get the clear string attached to their little hats if they didn't have their original string, then position them. They are larger than the ones my mom has, but this year I got to recreate a little childhood magic in my home for my children. I hope these don't disintegrate from age because when they are married, they will only have a pile of pixie dust! 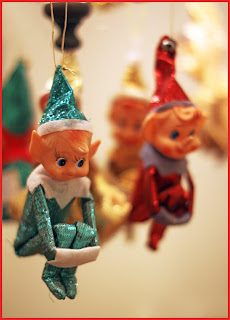