Get Your Red Undies Ready! 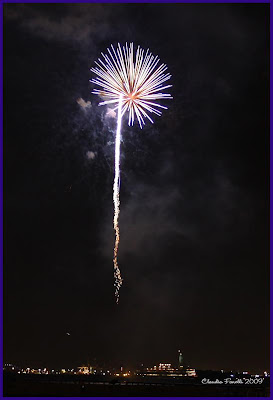 As an Italian-American, I can't say I have followed the Italian traditions for New Years, perhaps out of laziness or because my kids don't like sausage and I don't like lentils very much. (Ok, it's not the taste as much as the after effects, but I digress) So we don't eat anything special in my family on New Year's Eve. But in Italy, New Year's Eve is celebrated with a meal consisting of a special type of spiced sausage called cotechino, it is said to symbolize fat wallets in the coming year, and lentils, which, because of their shape, symbolize coins, and as such, prosperity for the coming year.

Italians frequently drink spumante as their wine of choice on Capodanno (New Year's Eve), and their underwear of choice is traditionally red- it's supposed to bring luck in the new year. So, after a meal of sausage and lentils, washed down with some spumante, you take in the traditional fireworks display wearing your red underwear. If you have the time, you can toss some old items you don't need anymore out of your window to get rid of the old and ring in the new.

So, to everyone, Felice Anno Nuovo! And if you want to try the cotechino and lenticche recipe, here's one, courtesy of florencevillas.com


1 1/2 cups green lentils
2 tablespoons olive oil
1/4 pound prociutto, pancetta, or bacon, diced
1 medium onion, diced
1 carrot, diced
1 small fennel bulb, diced
1 shallot, minced
2 or 3 cloves garlic, minced
1 pound sweet Italian sausage with fennel
1 medium can of chopped tomatoes
1 small dried chili pepper, or red pepper flakes to taste
1 bay leaf
salt and pepper to taste
Most lentils sold these days do not need to be soaked ahead, but it is best to follow any package directions that come with the lentils you buy. Put lentils in a pot of boiling, salted water; when the water boils again, cover and simmer for about 30 minutes or according to package directions. Drain..

Saute the bacon, onion, carrot, fennel, shallot and garlic in the olive oil in a large skillet. When vegetable are soft, remove and brown the sausage in the same skillet. Set sausage aside on paper towels.

Remove all fat from the skillet and return the bacon and vegetables to the pan; add the tomatoes, hot pepper, and bay leaf, and simmer for 20 minutes. Add the sausage and heat through, simmering for 5 minutes or more.

Season with salt and pepper and serve on a large platter accompanied by mashed potatos.

Growing up Italian, we've never eaten lentils on New Years, though I love them. We do, however, eat homemade pizza at midnight. Delish this year, by the way. Never heard of the underwear either - interesting! I do have a big box of stuff to throw out the window - good thing garbage day is tomorrow. Maybe we should clean out our freezers ;)

This is great Claudia!! Thanks for sharing!! Interesting stuff!! Will be back for sure!