When I was a kid, and I mean as far back as I can remember, my grandparents had a clear toilet seat with real coins inlaid in the plastic. As a very young child I thought this was the coolest thing ever and always tried to count the coins and see how much money was in there, but would lose my place and give up. I knew there were Kennedy half dollars in there, maybe five. As a teenager I just thought it was freakishly odd. Nobody else I knew had a toilet seat like this and I always thought it was some special Italian item for some reason. It turns out that they bought it on a trip to where else? Las Vegas.

When my grandparents moved to Florida in 1986 they took the seat with them. On my first trip to visit them I recall saying "Oh My Gawd it followed them here." And to make matters worse, in their new home they put the seat in the bathroom that had a solid wall of mirrors and great big Hollywood vanity lights. It was what I pictured a Vegas casino bathroom to look like.

My grandmother died in 1996 and my grandfather moved back to Philadelphia to live with my parents. My dad had flown to West Palm Beach to pack up what he could for my grandfather and shipped it to Pennsylvania. He said he was mainly shipping items of sentimental or monetary value and having an estate sale for the rest. So, imagine my disgust when that coin-laden toilet seat showed up- IN MY PARENTS' POWDER ROOM!! I know when I walked into that room I actually screamed. "WHY WON'T THIS SEAT DIE?" My mother said "That's a very valuable seat." (To whom, I wondered, to the collectors of coin-encrusted toilet seats??) I responded "That is a very TACKY seat." Not to mention it did not match the décor in the powder room at all. Well, my mother must have agreed because on my next visit there, it had been replaced.

Fast forward about four years later when I was at their house after my grandfather died, throwing away some stuff I had stored there years earlier. Out of the corner of my eye I saw it, something bright and shiny under a box and some newspapers, like it had fallen out of the trash and then a box fell on top of it. I dug into the pile and to my utter horror there it was-- THAT FREAKING GAUDY COIN TOILET SEAT. I yanked on it to pull it out the pile and when I had freed it, I dumped it right into the garbage can. I smacked my hands together to dust them off and walked away proudly. That seat would be no more.

About an hour later my father came home from a fishing trip and I heard him open the garage door. He spent a few minutes in there putting his gear away and then he came into the house... HOLDING THAT @!(@*#)(# TOILET SEAT. "DAD! What is that a boomerang? I just threw it out." "Hey, you leave this be," he said waving it in the air. "This is expensive." "Dad,look, let's get the axe. We'll bust it open and you can have all the coins, ok?" My father gave me one of those patented "Don't mess with me" looks and returned that eyesore to the garage. I appealed to my mother. "Mom, is Dad just going to keep that coin seat in there like Fred Sanford?" "He still has it?" ooops. "Yes, I threw it away and he fished it out." "Well, you know, it wasn't cheap."

It's 2008 and the seat remains in the garage. Not being used, of course, just saved. 'Cuz it's expensive. 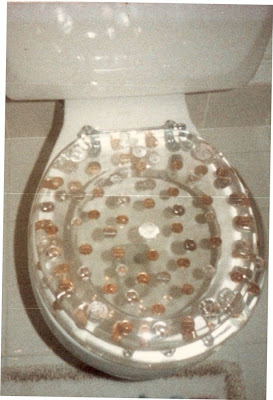 omg, that thing is tacky!!

Sooo, people's butts have been on that seat and you guys just keep passing it back and forth? Skeevy!

Last time I saw a seat like that go up for auction, used, it sold for over $200 on E-bay. It IS valuable. Just keep it in the garage until you can take it to a coin dealer to be valued.

I know you think the toilet seat is tacky, but my grandparents had one too and I always remember it. Unfortunately, my grandfather just passed away and a cousin took the toilet seat. I would love to have one of my own and would gladly pay you to rid yourself of it. Please contact me at smw_78@yahoo.com if you'd consider selling it. I would greatly appreciate it.

I know you may think the seat is tacky, but my grandparents had one too. Unfortunately, my grandfather just passed away and a cousin took the toilet seat. I'd love to have one of my own and would gladly buy it from you! If you would consider partling with it, I would greatly appreciate it. Please contact me at
smw_78@yahoo.com. Thanks for your consideration.