Today my father turned three quarters of a century old. I wish him at least another quarter and much good health with which to enjoy those years. 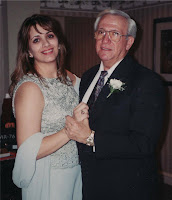 I have written about my dad before, because he has had a big influence on my morality (as has my mother) but also on my political understanding and views.

My dad is super-conservative. When I was a kid, I never realized that his views had a label. I debated some of those views as I got older and thought I knew more than he, but I eventually came to my own conclusions about them and with the exception of a few, I share those views.

Growing up, my sister and I knew the words "pinko" and "commie" as part of our vernacular. Patriotism was instilled in us from the time we learned that an American flag is not a toy, and that people died to allow us to live the way we do. When I was a senior in high school, my dad and I, both Stallone fans, went to see Rambo, First Blood, Part II, where Rambo rescues the POW's in Vietnam. That sparked great coversations about history and communism and I learned words like "black pajamas," and finally realized why my parents would not watch a Jane Fonda movie.

A veteran of the army who served in Germany after WWII, my dad is a treasure trove of historical knowledge. All of what I learned about that war and that period of history comes from my father, not from my junior year history class. (Although I do remember the word "blitzkrieg," but that's about it.)

It's not just because of politics that I hold my dad in such high regard. It's for his deternination, his intelligence, his sense of humor, honesty and his tremendous love for me that I love him so much. It's for the way he broke the news to me that my goldfish died when I was five, and shed some tears with me. It's for the way he taught me that being silly makes you feel good, but never at the dinner table. It's how he drove me to and from a friend's house or a dance at night even though he was exhausted after work. It's the way he showed me that living a honest and clean life is the only way to live and that nothing is more important than family. It's because I never heard my dad say an off-color word- ever- because he has too much respect for women to say a dirty word in their presence.

So, for all he taught me, and for all he means to me, Happy Birthday to my father. I am fortunate and grateful to have you as my dad.
Posted by Sigi Me at 7:53 PM

Your dad is so great. I wish him many years more.